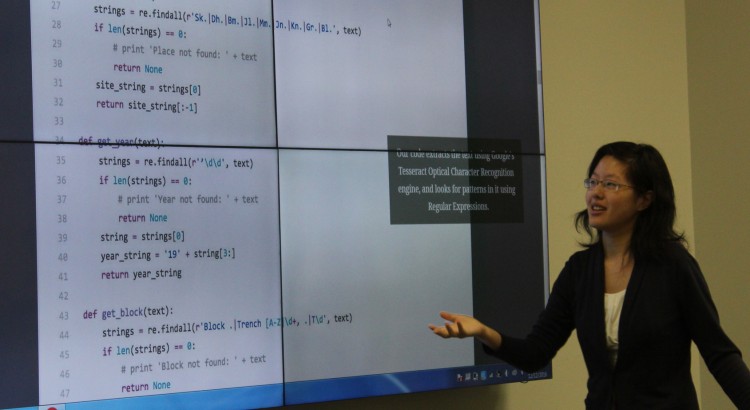 In Fall 2016, the five undergraduate Claremont Colleges, comprised of Claremont McKenna, Harvey Mudd, Pitzer, Pomona, and Scripps Colleges, launched their first Digital Humanities course, DH 150: Digital Humanities Studio. Under the leadership of Dr. Daniel Michon, the faculty director of the Mellon DH Grant and Assistant Professor of Religious Studies at Claremont McKenna College, Eddie Surman, a Master’s student at Claremont Graduate University, and with the support of Dr. Ashley Sanders, Director of the Digital Research Studio, this course provided students an opportunity to collaborate with a professor to design and carry out original digital scholarship projects. One student group chose to recreate a portion of an ancient archeological site in Taxila, Pakistan in 3D and develop a virtual reality application for users to explore the site using the HTC Vive. The other group produced a georeferenced map of the archeological site at Sirkap in Taxila with a searchable and filterable heat map of material objects found at the site.

The second group was comprised of eight students, some coming from computer science, while others were humanities students. Their project, “Digitizing Material Culture: Explorations of Socioeconomic Distribution in Sirkap,” sought to determine if there was a correlation between room or house size and the number and variety of material objects found, and if this correlation could be used to draw conclusions about the socioeconomic status of inhabitants. While they concluded that there is, indeed, a correlation, they have not yet been able to make the link between this correlation and inhabitants’ “level of living.” However, their visualization project revealed several intriguing insights. For instance, they noticed that there were numerous sculptures in the Hellenistic style in the Apsidal temple, but the temple was used by Buddhist monks, and therefore, one would expect Indo-Parthian or Buddhist artifacts instead. They also found a high concentration of objects that were classified as “female” near Stupas and the Apsidal Temple, prompting additional questions for further research. While they were not able to accomplish all of their ambitious goals with this ten-week project, the documentation of their process and their machine-readable dataset are invaluable contributions to academics in many disciplines and to scholars of ancient Pakistan in particular.

Both the course and the students’ project are important proofs-of-concept. Building on the lessons learned in this course, Dr. Sanders will offer additional iterations in the form of “clinics,” which will be smaller versions of the class that focus on one particular project that a faculty member has proposed or that students have designed for a professor. The students from the first class plan to work with Dr. Michon to make their dataset freely available to other scholars. As the students note in their final report:

The vast majority of academics and archaeologists focus on the excavation of new sites because this is where academic and institutional incentives lie. … This is where we believe our project has disruptive potential, as we have digitized a twentieth century excavation report in such a way that allows it to be analyzed using any modern tool or methodology, and proven that this can be accomplished with relative ease.

Additionally, we have freed the data from the confinement of classification, and allowed it to be viewed spatially. This allows us to combine the data in any number of ways, gaining new insights that would have previously been impossible to see from the excavation report.

This course and project have demonstrated what is possible when students have the freedom to work with a professor as collaborating scholars, design a research project that is meaningful to them, and to apply their skills to novel problems. This group was so excited about their work and the potential for resulting new scholarship that they have asked Dr. Michon to continue working with him to publish a scholarly article and to present their research at an academic conference. He and Dr. Sanders are currently designing a follow-up course that will allow the students to do just what they have asked and add their contribution to the scholarly conversation.