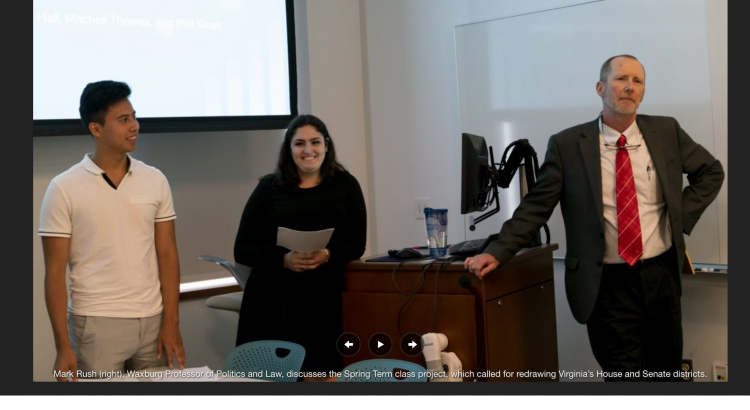 by Mark Rush and Dick Kuettner

The gerrymandering controversy in American politics offers an ideal subject for a blended learning class that draws upon racial justice, electoral behavior, electoral reform, law, political science, data analysis, and the use of geographic information systems technology. We combined each of these themes into a class that entailed the practical application of GIS and data analysis skills to a contemporary public policy issue that animated the news as the U.S. Supreme Court prepared to issue its second gerrymandering decision in as many terms.

We used the class as a vehicle for political reform. The underlying premise is that the prevailing method of conducting elections in the USA (the single-member district system) is simply inadequate for promoting minority representation rights and competitive elections. To abide by the many legal and statutory requirements that constrain the conduct of elections, it is actually necessary to gerrymander electoral district boundaries to ensure that minority groups have a fair chance to elect candidates of their choice.

In this respect, “gerrymandering” means simply the conscious manipulation of election district boundaries to enhance the likelihood of a particular result. In some cases, election districts can be drawn in a manner that unfairly results in the under- or overrepresentation of particular political groups. In other cases, however, it is necessary to manipulate (that is, gerrymander) district lines so that groups of minority voters are not carved up and rendered politically powerless.

A clear and effective solution to the problem of gerrymandering and minority representation is to change to a system of multimember districts in which voters rank-order candidates.

In such districts, voters are always guaranteed a choice of candidates because no one incumbent can scare off competition. As well, larger districts enable mapmakers to encompass groups of minority voters and give them a shot at fair representation without having to contort and snake district lines across municipal and other boundaries.

In our class, we proposed to redraw the maps of 100 delegates’ and 40 state senate districts into twenty district that would hold five delegates and two senators each. The arrangement minimized the number of municipalities split by or between districts and also enhanced the opportunities for minority voters to elect candidates of their choice.

In the end, our two teams of students performed remarkably well. The course was conducted in our month-long May (“spring”) term at Washington and Lee. It was the only class the students took, so they were able to devote all of their energy to learning the law and politics of voting rights as well as the GIS mapmaking skill-set. Both groups succeeded in minimizing the number of split municipalities and increasing the number of opportunities to elect minority members of the House of Delegates.

In choosing to focus on strict population equality across districts and maintaining municipal boundaries, the students actually encountered challenges in maintaining the number of minority senate seats. Nonetheless, this challenge would be overcome with more time in the term or in a successor course that would allow the students to re-run their strategies for drawing districts.

We include one of the team’s maps above. We are pleased that the class and background preparation demonstrated that with minor changes to the redistricting process, gerrymandering can be minimized, elections can be rendered more competitive, and minority groups can have more effective representation. Using redistricting as the vehicle for the reform project ensured that the students would have a context for applying knowledge about election law and voting while utilizing the GIS mapmaking skills we imparted during lab time.

While the class was a tremendous success, it was also a tremendous amount of work. A short, intense term such as W&L’s spring term is the ideal vehicle for teaching such a blended class that draws upon a variety of teaching modalities. We would need to think twice before looking to teach it during one of our 12-week terms in which students would have to balance it against three or four other classes. A course such as this one requires intense focus.

Within that constraint, however, we are thrilled to present this brief overview of a remarkably successful class and its findings.