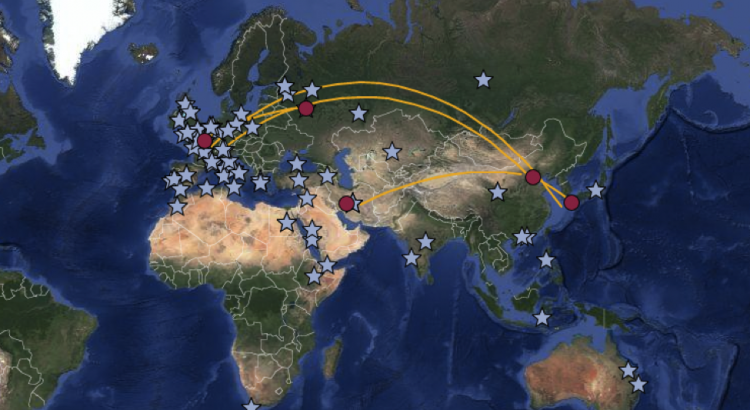 I learned about The Early Novels Database when my English professor, Emily Vasiliauskas, told me about a joint END/LACOL effort to include more undergraduate students through summer internships. The project offered a unique combination of scholarly research available to undergraduates in the humanities with an introduction to a rapidly emerging sector of my own field I knew very little about. Throughout the summer, I worked with peers and mentors from Swarthmore College, University of Pennsylvania’s Van Pelt Library, Haverford College, and the Tri-College Digital Humanities initiative to gather metadata on early English novels. The experience acquainted me with the breadth and depth of works beyond the traditional literary canon. It also provided me with a rare opportunity to learn unfamiliar skills in the digital humanities in the context of my own discipline.

The daily routine of paging through dozens of never before cataloged early modern novels might seem repetitive on the surface. In practice it acquainted me with a new way of close reading distinct from what I was accustomed to in my academic courses. I learned about preservation and handling techniques essential to maintaining special collections and preserving aging works. I became fascinated with the question of the book as object. Specifically, I was interested in books which had been physically torn, annotated, or stitched together, and books which comprised edited compilations of other works. One of the most interesting examples of alteration to the book as object is the popular 18th century practice of binding together periodicals received over a subscription period to form one larger volume. Certainly, there is a sense of continuity or comprehensiveness, even status, that comes with a complete set of matching volumes, a gilt-edged collection of encyclopedias. I wonder whether at least a portion of the appeal of this completeness might have been the pretense of omniscience, or appearance of omniscience, it conferred on the owner.

At one time, owning a complete set of encyclopedias might have connoted possession of nearly all officially recorded, general knowledge—a possession that, in the digital age, is simultaneously impossible in physical form as information is constantly generated, and accessible to everyone via the Internet.

The practice of interacting constantly with dozens of rare books gave rise to my final project, Imagined Distance: Visualizing Place and Space in Faux Epistolary Travel Novels. I had the opportunity to peruse a variety of epistolary novels. Many of the characters wrote to one another across divides of cultural and physical geography, age, gender, and class background. My project focused on how epistolary novels ignore, honor, or attempt to collapse those distances: geographical, emotional, or even spiritual. I sought to contrast and quantitate, when or if possible, the various types of distances in a novel as the author conceived of them with the distances I could map through various digital tools that use a standard Mercator projection. I used a corpus of literature that eventually organized itself around a particular subgenre, one both oddly specific and widely published in the 18th century.

This genre, faux epistolary travel fiction, emerged as a way for Europeans to read about the adventures of primarily non-white travelers–except those travelers were actually white British writers impersonating people of color.

What I found so interesting, even alarming, about the faux travel fiction trend in particular is that it creates and then purports to collapse a fictional distance from the dominant culture that the writer does not actually have to negotiate in the first place.

I used the intentionally blunt tool of mapping out locations I noted in the novels, noticing which details fell off the page. I was particularly interested in those distances that defied my attempts at modelling. After completing close readings, I used the Stanford Name Entity Recognizer tool to identify locations in the novels I’d selected. I created in Google My Maps a map of each of the novels, with their geographical references displayed on a standard Mercator projection map, and I used Google Fusion Tables as a further tool for exploration. I brought together my newfound facility with digital tools and my love for geography in literature in a final public presentation supported by faculty and my peers. Examples of the maps I created can be found at the top of this post and below.

From the first type of maps, which resembled Figure 1 above, I gleaned several important insights. First, the NER and Google My Maps alike struggled to correctly display certain place names. Sometimes, this was because the place names were entirely mythical. In other cases, the place names were exotified or anglicised beyond the potential for recognition by modern mapping and location software. Both of these challenges indicate that the place names referenced in faux epistolary travel novels exist along a spectrum of fictionality, some very real and some quite unreal, and that that spectrum of fictionality is mediated by the increasing exotification and misnaming of locations in the global south and in Asia, particularly outside the Middle East. I also noticed that in Figure 1 the clusters of stars, as place names referenced in the novels, became much more concentrated in Western Europe. The places in which the stars were tightly packed were mentioned with more specificity as well as with higher frequency for each individual descriptive term. To better visualize saturation and specificity, I created through Google Fusion tables the map in Figure 2. Warm colors indicate a saturated area of blue stars, with the red areas dominating in both specificity and frequency.

My overall experience at END, and particularly with this project, taught me a variety of skills I would not have considered particularly accessible to me or particularly relevant to my discipline. In order to best visually describe faux epistolarity, I learned to work with OpenRefine, MarcEdit, and a variety of mapping software tools. I built my own website and learned about the command line. I didn’t feel like a guest in the world of the digital, with all of the accompanying discomfort and feelings of being an imposter that might have involved. Instead, I saw myself as a humanities researcher with technical tools newly at my disposal. This was empowering for me. I know students who major in the sciences who love science fiction writing courses, which allow them to extend their own factual knowledge about the natural world to its inevitably absurd and beautiful end. I felt similarly about the opportunity to see the books I loved fantastically iterated in the Stanford Name Entity Recognizer, or graphed across a map of the world. I hope I can find that same wonder in my future research and experiences.

English major Caroline McArdle is a rising junior at Williams College.  Through a collaborative partnership between END and LACOL, Caroline joined the END project for a 10 week internship in the summer of 2016.  Read more about Caroline’s research with END here: