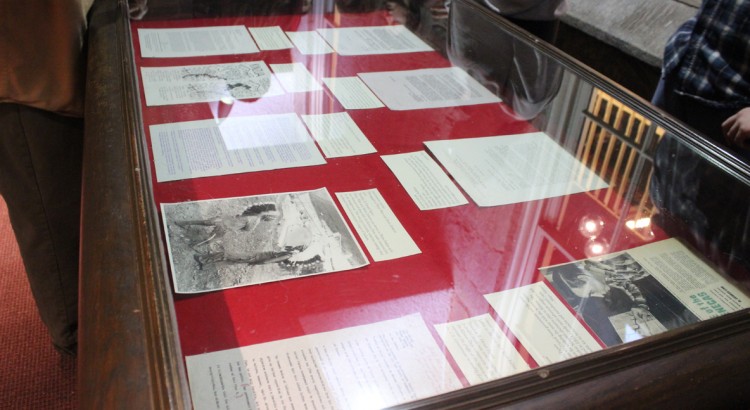 Students in an environmental studies-based writing seminar at Haverford College recently completed a digital humanities project—Broken Treaties, Forgotten Archives: Philadelphia Quakers, Allegany Senecas, and the Fight for Sacred Grounds—through Haverford’s Special Collections that focuses on the politics of water, environmental justice, and Indigenous rights. In this first-year seminar taught by John Hyland, a Postdoctoral Fellow in Haverford’s Writing Program, “Ecological Imaginaries: Identity, Violence, and the Environment,” students interrogated how imaginings of the environment are inseparable from issues of social justice. They spent significant time studying the Theodore Brinton Hetzel Papers, a Haverford alumnus who, along with other Philadelphia Quakers, served on the Friends Kinzua Dam Project in the 1950s and 1960s, a project that collaborated with the Seneca Nation of Indians in a fight to stop the construction of a 179-foot dam on the Allegheny River in Warren, Pennsylvania. The dam, which was completed in 1964, flooded out the sacred grounds of the Seneca Nation, dispossessing them of lands that had been granted to them in 1794 by the U.S. Government.

On designing the assignment, Hyland says,

By preparing little-known historical documents for a broader online audience, students learned how to think critically about questions of literacy in a digital environment for the liberal arts. This project’s shift toward an online audience pushed students to consider how their work would be received beyond classroom, and they quickly felt that much more was at stake in their writing than the completion of a seminar assignment.

With generous support from Haverford’s library staff, including Sarah Horowitz and Michael Zarafonetis, students prepared a selection of materials from the archive for digital platforms and curated a public exhibition in order to tell this story of a fight for Indigenous rights, sacredness, and environmental justice. Through this multimodal project, students composed different genres of writing and learned about the rhetorical contexts for digital platforms. They completed annotations using Neatline, constructed a timeline, and composed labels to accompany and introduce the archival items while also producing prospectuses, annotated bibliographies, and articles. In completing this project, students sought to provide a historical perspective on current events such as the current fight to stop the Dakota Access Pipeline at the Standing Rock Reservation in North Dakota. By the project’s close, students possessed a nuanced appreciation for the ways that archives illuminate contemporary moments.