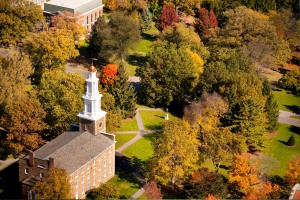 Chartered in 1812, Hamilton College is a coeducational, residential liberal arts institution of approximately 1800 students, nestled among the foothills of the Adirondacks in upstate New York. Education in all its forms is the central mission of Hamilton College. The pivotal commitment of the faculty, administration, and staff to the intellectual and personal development of students is the College’s most important and enduring tradition. Hamilton’s curriculum reflects an appropriate respect for breadth and depth in the study of the liberal arts, while continuing its traditional emphasis upon oral and written communication. The fundamental purpose of a Hamilton education is to enable young men and women of extraordinary talent to realize their fullest capabilities, for their own benefit and for the world in which they live.

END_OF_DOCUMENT_TOKEN_TO_BE_REPLACED

Hamilton College looks forward to hosting the summer 2021 consortium-wide LACOL, June 21-23, 2021.  With “Play and Innovation” as the official 2021 theme, this summer gathering will bring together faculty, technologists, research librarians, academic support specialists, and other educators and students for collaborative exchange and playful discussion. END_OF_DOCUMENT_TOKEN_TO_BE_REPLACED

Digital Agility: Embracing a Holistic Approach to Digital Literacy in the Liberal Arts

END_OF_DOCUMENT_TOKEN_TO_BE_REPLACED 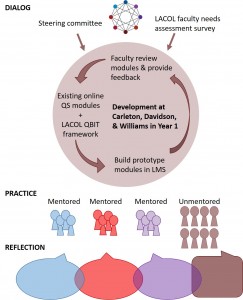 LACOL has been awarded an IUSE grant from National Science Foundation for a project titled, “Online modules for quantitative skill building: Exploring adaption and adoption across a consortium”. This three-year project will research the adaption and adoption of face-to-face and online pedagogies for teaching quantitative skills (QS) with the aim of improving understanding of best practices for the development of online modules to support students’ QS development.

The project proposal was developed by Melissa Eblen-Zayas and Janet Russell of Carleton College and Laura Muller and Jonathan Leamon of Williams College based lessons learned from the QLAB pilot project.

Additional information about the project, including details about the project advisory board, a needs assessment survey for faculty, and opportunities for faculty and staff to get involved, will be be shared later this summer and into the fall through the QS Working Group Forum.

END_OF_DOCUMENT_TOKEN_TO_BE_REPLACED

Researchers studying awe in a lab setting can’t take participants to awe-inducing locations like mountaintops, and the standard of watching videos of those situations has limitations. To help solve this problem, Hayley Goodrich ‘17, a Psychology concentrator at Hamilton College, and Educational Technologist Kyle Burnham recently set out to explore the use of Virtual Reality (VR) for Goodrich’s thesis project on the experience of awe.

A vague theoretical connection between awe and meaning exists in the awe literature. According to Goodrich:

awe arises when something in the environment is vast and cannot readily be incorporated into one’s existing meaning frameworks.

Goodrich wanted to explore if awe really did emerge in response to a violation of some meaning-making structure. Studying such a connection necessitated that she first make participants feel awe. END_OF_DOCUMENT_TOKEN_TO_BE_REPLACED

The book made by the first-year students in Visiting Assistant Professor of Literature Andrew Rippeon’s Unpacking My Library course is now viewable. (To view the augmented reality elements of this book using HP Reveal, follow instructions below.) END_OF_DOCUMENT_TOKEN_TO_BE_REPLACED

Access, collaboration, and prisons – three words one is unlikely to see in the same context. Yet the American Prison Writing Archive (APWA) works collaboratively to provide access to the witness borne by people in prison today. Directed by Doran Larson, Walcott-Bartlett Professor of Literature & Creative Writing at Hamilton College, the APWA is a continually growing online archive of essays written by incarcerated people and prison workers. The APWA provides access to the lived experiences of those inside these closed systems. These essays unveil the prisons we have constructed. We expect them to mete out justice. What we find in each essay is something much less noble.

Reading any single essay is a powerful experience; reading across essays offers the outlines and interiors of a city just smaller than Chicago.

While emerging from the American archipelago of over 6,000 carceral institutions, the cityscape we discover is as cohesive as that of our Chicago, LA, or New York. But this is a city dedicated to the production of pain. (See Larson’s Fourth City: Essays from the Prison in America, and his MOOC on the history of prison writing in the US.)

Larson began working with the Digital Humanities Initiative (DHi) at Hamilton College to develop an online, open access archive of prison essays in 2010. In December 2017, the APWA reached two important milestones: 1) over 1000 essays are now online; and 2) a transcription tool was developed to crowdsource transcription of the primarily handwritten essays. The transcription tool increased the ability of transcribers anywhere to request an account and contribute to transcriptions that allow full text searching of the archive. With over twenty new essay submissions and associated signed permission questionnaires per month, the APWA team has focused on processing submissions, correspondence, digitization, and metadata entry. Volunteer transcribers continue the practice of collaboration that fuels every aspect of the APWA. The NEH grant Larson received this past year contributed to the development of this transcription tool and also supports an administrative assistant working for the archive. Collaboration is woven into all of the work of this archive: from Larson’s work within and across institutions to maintain prison writing programs, to the team ethos of the DHi Collection Development Team in developing and sustaining the growing archive, to the research of undergraduate students, faculty and graduate students who can use the archive from other institutions. END_OF_DOCUMENT_TOKEN_TO_BE_REPLACED

See also: The Life of Books

This semester, students in Professor Andrew Rippeon’s “Unpacking My Library: The Book, The Burke, and the 20th Century” (Literature & Creative Writing) are introduced to the history and practice of the book in a long arc from the pre-Gutenberg era into the present.

With a focus on the 20th century, Rippeon’s students consider “the book” and “the library” as literary, theoretical, and material engagements: what does it mean to curate a library? How do technological developments bear upon information? How do authors and artists respond to these questions? Over the semester, and in addition to reading in these contexts and to writing their own original critical essays, students make letterpressed broadsides and books, curate micro-libraries, and produce (as a hard-copy book) an anthology of their writing.

In this iteration of the course, students will create their own charged technological context for the book: how does an augmented-reality book further pressurize the context we’re discussing? Students will use 3D technologies (3D printing and the Sprout Pro learning station), and augmented reality applications to produce a book that has a much broader material-technological footprint, at once engaging with and commenting upon the status of the book in the 21st century. We intend to produce an augmented-reality book that documents its own context and production.

END_OF_DOCUMENT_TOKEN_TO_BE_REPLACED

Hamilton College is pleased to announce its participation in the Building the Campus of the Future: 3D Technologies in Academe EDUCAUSE/HP research project. This exciting initiative seeks to identify the 3D modalities that hold the greatest potential to result in improvements in learning and research outcomes, as well as enhancements of student engagement, faculty satisfaction and other qualitative metrics. The Research & Instructional Design Team (Library & IT Services) will be leading the initiative at Hamilton. END_OF_DOCUMENT_TOKEN_TO_BE_REPLACED