END_OF_DOCUMENT_TOKEN_TO_BE_REPLACED

Abstract: Digital competency initiatives begin from shared global objectives but must adapt to local culture and structures to succeed. Collaboration helps define needs and goals, but how can we collaboratively assess programs that adopt intensely local variations? In this pre-conference workshop, we will present multiple examples of program development with overlapping goals. After examining existing efforts on attendees’ campuses, they will develop plans for their own initiatives, considering local circumstances. We will then brainstorm with participants about how to collaboratively assess the impact of digital competency initiatives. Moreover, we will determine what evidence of impact would be meaningful to different stakeholders.

The LACOL Digital Competencies Working Group has formed to build on prior work related to Digital Competencies, Digital Studies, Digital Fluency, and Digital Literacy.  These terms cover a group of related concepts, all of which reflect concepts and skills that are vital to the 21st Century learner and citizen … what we might call Digital Agility.

The goals of the working group are to make concrete progress on ideas develop at the 2017 Think Tank and 2018 discussions.  LACOL members are invited to join the group; reach out for more information!

Related Event: Envisioning a “What is data science?” webinar for students (Oct 1, 2018)

Description: Following on from the lively July webinar focused on the NAS Data Science for Undergraduates report (nap.edu/25104), LACOL DS+ members are invited to join a follow up webinar .

END_OF_DOCUMENT_TOKEN_TO_BE_REPLACED 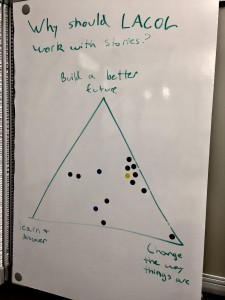 Description: Following on from the lively July webinar focused on the NAS Data Science for Undergraduates report (nap.edu/25104), LACOL DS+ members are invited to join a follow up webinar.
END_OF_DOCUMENT_TOKEN_TO_BE_REPLACED

Yes, we changed our name!

Recently and for a while, stakeholders across our membership have agreed that the original name – Liberal Arts Consortium for Online Learning – only partly aligned with our current work, shared goals, and mission.  After some deliberation, a name change was unanimously endorsed by our Faculty and Leadership Councils this fall.

How important is it for instructors to include their own faces when creating instructional videos? The answer might surprise you. Dann Hurlbert, Carleton College’s Media & Design Guru (and an actor, director, and inventor of the Little Prompter) leans on research and his own expertise to offer guidance.

END_OF_DOCUMENT_TOKEN_TO_BE_REPLACED

Convened by Chico Zimmerman and Clara Hardy (Carleton College), about a dozen faculty and technologists met at the workshop to make progress on ideas that emerged from several separate Zoom meetings in the two months preceding the conference. Eventually, the discussions centered on three main elements to focus on moving forward in the near term:

The CHIANTI site will continue to be built through the summer and populated with some initial resources for testing. A prototype submission form has been drafted and will be tested and finalized through the summer as well.  The group will be soliciting contributions once these elements are finalized.
END_OF_DOCUMENT_TOKEN_TO_BE_REPLACED

Dann Hurlbert and Palmar Alvarez-Blanco at Carleton College recently co-taught Spanish 206, a course focused on developing language skills with native speakers and fostering civic engagement–while also giving something tangible back to the community. Students in this course worked with under-represented local organizations to help them create a “participatory videos” (short documentaries) to help tell each organization’s story. In addition to having students create video as a portion of their coursework, Dann also used instructional videos to teach and guide the learning. Dann created a successful Moodle-based micro-course that can now be easily replicated and plugged into a multitude of courses in which the faculty member hopes to tie Civic Engagement with his/her own course content, and video production.

Here’s a short video that offers a peek into the course and this engaging instructional method:

*Note: this sample video includes short selections from the following films: Bacon and God’s Wrath by Sol Friedman and Sarah Clifford-Rashotte; Godka Circa by Antonio Tibaldi and Alex Lora; Damon at 86th Street by Emily Sheskin, and the Price of Certainty by Daniele Anastasion.

For more information on how you and your institution can use this technique and these materials to foster civic engagement in your courses, contact Dann at dhurlbert@carleton.edu

** Interested in collaboration around data science education for the liberal arts? Sign up to join the new LACOL Data Science+ Group.

Following on from the lively Data Science meets Environmental Studies meet up at the 2018 LACOL summer workshop, LACOL members are invited to join an online conversation to discuss faculty perspectives on the newly released Data Science for Undergraduates: Opportunities and Options report from the National Academies of Science. (More about the NAS report is here: http://nap.edu/25104)

Discussion of the report through a liberal arts lens will be lead by Dr. Nick Horton, Professor of Statistics at Amherst College.  Nick served as contributor to the report on the Committee on Envisioning the Data Science Discipline: the Undergraduate Perspective.   As he and colleagues at the summer workshop note, there is considerable potential to engage with each other as liberal arts colleges around curriculum development (see ASA Guideline, developed with AALAC) and other ways to support students learning to work with data.

Faculty and academic support specialists interested in data science education across the curriculum are encouraged to join this conversation!

Consortium-wide workshop at Carleton College, May 31-June 1, 2018. Browse the page below to see tweets (TWEETS); and see photos (INSTAS) from the #LACOL2018 workshop.

Yay! Thanks for all your energy and ideas at the workshop @gdouglassjaimes … Onward! #LACOL2018 https://t.co/SXwp9Ugp7U

Back in LA, still running on a post conference high from the great conversations and collaborations at #LACOL2018. Looking forward to building that cross-institution course: Critical Data Science or all!

That’s a wrap! Thanks to @CarletonCollege and everyone for being here! And congrats to contest winner Monika Hu! #LACOL2018 pic.twitter.com/IwtXyjrxFS

END_OF_DOCUMENT_TOKEN_TO_BE_REPLACED

How is online teaching and learning relevant for small residential liberal arts colleges?

In this panel, three faculty members with hands-on experience teaching online tell their stories and engage in a dialogue with colleagues across the consortium.  How might these insights help us build a vision for online teaching and learning that aligns with the core mission of our institutions?

END_OF_DOCUMENT_TOKEN_TO_BE_REPLACED

In the lightning round, LACOL faculty and staff will share an idea or demo – JUST FIVE MINUTES OR LESS – on a digital tool or teaching technique.  Some presentations are flipped – see videos below – so that more time can be devoted to discussion – that’s the thunder.

END_OF_DOCUMENT_TOKEN_TO_BE_REPLACED

Amazingly, all three contestants tied for 1st place in the initial round of voting. Upon further deliberation, Profs. Gross and Strand graciously awarded the grand prize –  The Little Prompter – to Prof. Hu.

Many thanks to Dann Hurlbert, Carleton’s Media and Design Specialist and inventor of The Little Prompter for sharing his expertise and fantastic gadgetry with the workshop.

And, thanks to *everyone* who took part in the contest. Your creativity and good humor was remarkable. All entries will be be shared with LACOL’s advisory councils. Stay tuned for further results of this intriguing deliberation.